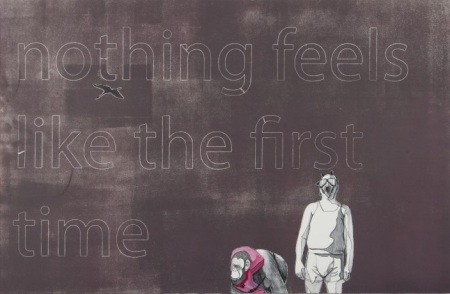 Last week, I was able to attend the reception for Computer Aided at the Masur Museum of Art. Computer Aided is an exhibition examining the impact technology has on current art making practices and contemporary culture. I was enjoyed reading what Curator Benjamin Hickey had to say about my work in the exhibition catalogue:

“For Computer Aided, Chambers created an edition of nine mono prints on which he drew images with gouache and ink. He also used the computer drafting program Illustrator to print vinyl stickers featuring the silhouettes of these works’ characters as well as the words “nothing feels like the first time,” the name of the edition. The silhouettes left voids filled by the brilliant white paper beneath and bring to mind the various meanings lurking behind the words and images on Chambers’ pieces. It is interesting to think of printmaking as a near timeless medium associated with Albrecht Durer, one of the medium’s most famous and expert practitioners who worked in the sixteenth century. Printmaking was the first reliable way to make copies of an image, a feat that is now seen more as a right than a potentially laborious art form. Each of Chambers’ mono prints are nearly identical, but were individually made, thereby calling attention to how difficult image making has been in a historic sense. Chambers’ mingling of historic and contemporary art making techniques lends his art a great deal of historic perspective. Specifically, a whole series of images titled nothing feels like the first time asks if it is important to prioritize the means in which we experience images. Is seeing a thumbnail of an image search on Google a lesser experience that seeing the original in person?

Mr. Hickey was spot-on. The work is also concerned with the incongruity between the limitations of language and our range of experience. Nothing feels like the first time, but there are many first times. With infinite alterations that take place within repeated happenings, how do we decide which experience is new or merely another repeat in a long line of similar situations?

The show will be on exhibit through October 5, 2013. The Museum is open 9-5, Closed on Sundays and Mondays. The exhibit contains work from the following artists:

I have two exhibitions coming up in Baton Rouge and New Orleans. Both shows will open in October. Stayed tuned for more info.